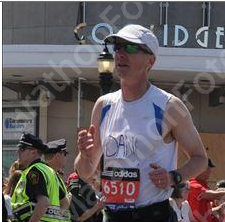 With an estimated 1M spectators along what seemed like every inch of the course, completing the 2014 Boston Marathon was truly an amazing experience. This time, the finish was thankfully uneventful. With my training complete, I felt that I was more prepared for this year’s race than 2013. The weather was slightly warm for runners, but perfect for spectators. I saw a number of runners with prosthetic feet/legs. Although I don’t know for sure, I’m sure that many were victims of the 2013 Boston Marathon bombings. Each time I and other runners passed one of these brave marathoners, we shouted encouragement and thanked them for their efforts. It’s hard enough to complete a marathon with all of your limbs, I can’t imagine the training, dedication and tenacity required to complete a marathon on prosthetics.

Following are my splits per mile.  You can see that I really started to slow in the Newton Hills and then again the last 4 miles.

My preparations for this year’s Boston Marathon started back in Dec 2013. I slowly increased the distance of my long runs and eventually completed 2 x 20 milers. I ran almost weekly intervals at my local (Camas) high school track. I worked my way up to the Runner’s World “Yasso 800s” interval workout (10 x 800s). I actually only completed 9 x 800s a few weeks before the marathon, but all were sub 3:00. According to theory, I should have been in shape to break 3:00hrs. My marathon training also consisted of numerous fartlek, tempo, hill and some easy runs (typically on hotel treadmills where I can only run about 40 minutes before boredom overwhelms me). Just as important as feeling prepared, I was injury free. I had become best friends with my foam roller since December.

Bottomline, I felt prepared for this race as I toed the starting line. The only nagging worry I had was that everytime I completed a long run during training, I noticed that my legs really felt tired. It didn’t seem that the long runs were getting any easier. Also, 2 weeks prior to the marathon, I completed a “trial” half marathon at 1:29 (race pace for someone aiming to break 3:00hrs). During this run, I didn’t feel that I could have gone another 13 miles at the same pace. I didn’t feel horrible, nor did I go all out in this effort, but I didn’t feel like I could easily continue the effort. To put my mind at ease, I figured a good taper and healthy eating the last 2 weeks prior to the marathon would leave me refreshed.

Below are my times/mile for this year’s Boston Marathon. As you can see, I started to slow a lot in the 2nd half and really hit it hard the last 6. My quads were tightening, I could feel a blister forming (more of a “hot spot”) on the ball of my right foot and suffered through inner thigh chaffing the last 8 miles (thank goodness someone was holding out Vaseline near mile 19).

Lesson’s Learned (what went wrong/what went right in my training and during race day):

1) I didn’t drink enough before and during the race. I purposely didn’t drink much at night in the days before the race because I thought it would negatively impact my sleep. I drank water or Gatorade at every aid station along the course, but it’s hard to get a lot down. In previous recent marathons where it was warm (Chicago 2011), I often drank water and Gatorade at numerous aid stations. With temps in the lower 70s by 100pm, I really should have drank more. I’m certain I was dehydrated because I didn’t need to go to the bathroom for nearly 8 hours after I finished the race. I’m sure I had at least 4-5 bottles of water and a couple of beers at dinner during this time frame.

Next race, I think I’m going to race with a couple of bottles on my belt.  I train this way, so it shouldn’t be a big deal.  This way, I can ensure that I get enough because I will still drink at each aid station.

2)  In retrospect, I don’t think that I ran enough long runs.  Although I complete a number of 16 – 20 milers, I should have completed a few more (at least 18 milers).  I definitely should have pushed harder at the end of each of my long runs.  It seems like my legs were “dying” at the end of each of my long runs.  My legs were definitely “shot” at the end of this Boston Marathon.  It’s not an easy course.  Even though there’s plenty of downhill, there’s also the “killer” uphill at miles 16-21 and then the downhill to the finish.  Somehow I need to build up more strength in my legs.   I’ll post more about leg workouts later.