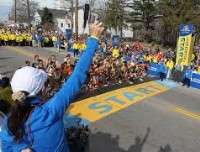 The race portion of my first Boston Marathon exceeded all of my expectations.  Having run a few other “big” marathons like Marine Corps and Chicago, Boston is truly unique.  The crowd lines the course almost every step of the way.  The night before my preparations included a dinner with training partners from my hometown in Washington, in Boston’s North End.  I stayed with some friends in Beacon Hill, just a 1/2 mile away from where the buses met us at 630am on Patriots Day for the ride out to Hopkington.  The weather was perfect for a marathon.  Sunny and in the lower 40s at 700am with a very slight breeze. After completing the hour+ ride from Boston to Hopkington High School and the athlete’s village we settled in to stretch and take care of pre-race business.  The make shift village (really the football field & baseball fields with big tents in the middle) were packed with anxious runners. Unlike the 2012 Boston Marathon, which started in 80 degree temperatures and everyone getting out of the sun.  This year, we all craved the warmth of the sun.  After a brief moment of silence for victims of the Newtown Connecticut massacre, our wave and starting corral was asked to head out.

We placed our bag of dry clothes and cell phone in the appropriate school bus and walked through the village about .7 miles to the starting line.  After a quick rendition of the National Anthem, I found my starting corral, peeled off my old, ratty Notre Dame sweatshirt, threw it in the donation bag by the side of the road and completed my last minute preparations for the start. At 1000am the gun went off and the race started.  It took about 2 minutes to cross the starting line. For those in Corrals 6-9 it took 4-5 minutes. Fortunately the race is timed by the chip embedded in your number. As we picked up our pace and moved through massive crowds cheering us onward, we headed down the hill and away from Hopkington.  Seeing the mass of runners in the road with all the colors was amazing. I had trained for Boston for 2 1/2 years and I was finally here.  Although it seemed like we were just shuffling along, we covered the first mile in 6:50.  As we hit the first set of trees, at the side of the road, without crowds, about a mile in, a bunch of people peeled off the course for a much needed pit stop.  Marathon runners have no modesty. There were men and women alike that dove into bushes or next to trees to relieve themselves. The fact is, for the last 3 days, we had all been drinking a lot of water.  Staying hydrated is one of the keys to successfully finishing a marathon or any long race.

Crossing the start line about 3:00 minutes after the leaders

As the miles started to go by, I continued around a 6:45 pace.  Under 3 hour marathon pace.  Although I had been concerned about my conditioning, prior to the race, I felt that the pace of my group and the crowd all along the course would help me finish around 3:00 hours. As we raced through towns like Ashland and Framingham, I was amazed at how packed in the small 2 lane road the runners were.  It seemed that for 10+ miles, the line of runners wasn’t stretching out as I had seen in previous marathons.  Because the runners start position is based on qualifying times, we were all in similar condition and able to keep up close to 3:00 hour marathon pace.  I kept a comfortable 6:50 pace during miles 4-10 as we passed through Natick. I passed through the 10k marker in a little over 42 minutes. I was thinking that this check point would trigger a text to my family with my pace. This would be the first indication to anyone tracking me that I was actually on the course and running. I wondered where my family would be along the course to see me and chear me on. I figured they would likely be at the end of the race in Boston.

I continued to run comfortably around 6:45 to 6:55 miles for the first 1/2 marathon.  A little before the half way point, I could tell that I was starting to tire. My arms were actually feeling a little tired.  I shook them out and told myself to relax. At Boston, there’s aid stations with Gatorade and water every mile starting with Mile 2.  Fortunately the tables are on each side of the road, so you don’t have to worry about crossing the road at the last minute to get a drink.  You don’t think of the additional distance you cover over 26 miles when you “zig-zag” across the road.  It does add up.  This year, I actually covered an additional .3 miles.  That’s over 2 minutes added to my finish time.

In my experience, I think it’s important to drink something at every station during a marathon. I typically drink water for the first 6-7 miles and then go to Gatorade and water.  As we approached Wellsley College I could hear the screaming girls.  I had been warned that it would be very loud.  The Wellsley girls didn’t disappoint.  I could hear them a few hundred yards before we passed. They held signs asking for kisses, some even claimed that they had never been kissed.  Other signs declared where the girls were from.  I was starting to feel some marathon pain in my legs as we went through Wellsley.  I also didn’t have time nor the desire to break stride and kiss anyone.

One of my strategies to get through the marathon is to carry 4-5 energy gels.  I like the Powerbar brand that’s easy to open and squirt in your mouth. As you make your way through the race, I don’t have the energy to chew on anything. I consumed gels right before the aid stations at miles 7, 11 and 15. I really can feel the sudden boost you get from the gel.  After mile 15, the hills start, so the gel was greatly needed. At mile 17, they handed out gels, so I grabbed 2 and stuck one in my belt. The first was perfect for completing Heartbreak hill which would be through by mile 21. The last gel was badly needed to get me through the last 4 miles.

Another thing I did that really helped was to place a big sticker on my racing singlet with my name. I bet that no less than 500 people chanted “Go Dan” throughout the race. Once during the race, a guy who had been running next to me, stated that I must be the most popular guy on the course. As I made my way across Heartbreak hill and through Boston College, I was greeted by groups of people chanting my name.  This was incredibly motivating as my legs really started to tire the last 5 miles of the race. I really had a sense that thousands of people were personally cheering me on to finish.  In Boston, these crowds are 4-5 people deep the entire length of the course.  With fantastic weather, there’s no shortage of people to cheer.

The last 5 miles were a blur.  Not that I was going fast, but it’s hard to remember much besides massive crowds and a burning desire to finish the race.  The weather was comfortably in the upper 50s and sunny.  I remember running by Fenway Park, looking up and thinking how lucky those people were to simply sit and watch a baseball game while I was completely exhausted at mile 25.  As I made the last few turns and headed down Boylston St, I was on fumes.  The last few miles of a marathon are truely a mental game.  Obviously you train for months to finish, but I have never actually run 26 miles while training for a marathon. Just don’t stop and you’ll eventually cover the last few miles.

I was fortunate to finish.  Although my time of 3:05:38 wasn’t my fastest time by a longshot, I was very happy with the outcome. My family, including wife, kids, mom, sisters, aunt, uncle, cousins and some nieces were all watching near the finish line.  I am so thankful that I finished well before the explosions and that they were well away from the finish an hour later.