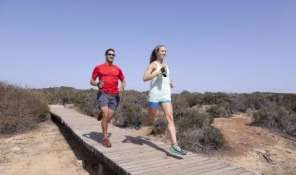 By Nuun Guest Blogger Jesse Kropelnicki of The Core Diet.

Even if you have never had a “cramping problem” in the past, neglecting electrolytes in training and racing could be compromising your results. Just like you wouldn’t wait until you were dehydrated to drink fluids, waiting until that first “cramp” is a signal from your body that your performance has been suffering for quite some time. Electrolytes play a crucial role in muscle function, adequate hydration status and digestion fluids during racing.

What is an electrolyte?

In medical or scientific terms, an electrolyte is “any compound that, in solution or in molten form, conducts electricity and is decomposed (electrolyzed) by it. It is an ionizable substance in solution.”

In other words, it’s a term for minerals that, when dissolved in water, break into positive or negative electrically-charged ions (anions or cations).

What are the functions of electrolytes?

Do you take electrolyte supplements before or after your run?

These ions carry electrical energy necessary for many functions in the human body, and optimal athletic performance requires adequate (and a consistent) supply of electrolytes. These ions move across membranes carrying fluids, nutrients and water. They aid in a number of processes that are important to an athlete:

However, repeated days of moderate or severe sweating can result in such substantial electrolyte loss, particularly sodium because of its high concentration of this mineral in sweat. When electrolytes are lost too quickly, the body does not have the ability to restore them as rapidly as they were lost. In these situations, dietary mineral intake is generally not sufficient to compensate for these large losses, and supplementation is needed to replace these electrolytes in order to maintain concentrations of body fluids.

What are the major electrolytes in the body and what do they do?

How are electrolytes lost?

Electrolytes are lost through urine and sweat. Endurance athletes can lose large volumes of sweat on a daily basis, which is accompanied by a similarly large electrolyte loss.  Each athlete has different electrolyte (and fluid) needs and environmental conditions of training and racing will factor into this.

Side Effects of Dehydration

In most cases, muscle cramping is related to either sodium or magnesium deficiency in athletes. If a deficiency occurs, cramps, tremors and spasm can be present. It is the Core Diet’s experience that acute occurrence of cramps during racing is typically due to sodium loss, and more chronic cramping (even between activity, during swimming or while sleeping) is typically due to magnesium deficiency. Another sign of sodium related cramping is a sloshy stomach. Another electrolyte, magnesium, is key in avoiding muscle spasms. A muscle “twitch” is usually a sign of low magnesium levels. Having proper sodium balance during digestion is important to fluid absorption.

Have you ever felt tingling fingers during your racing? If you have, you probably are experiencing a potassium deficiency. Many times a simple half banana available on many race courses can fix this problem before it impacts race performance.

How to replenish electrolytes?

Electrolytes help to increase the absorption of fluids into the bloodstream, and your muscular system operates efficiently which is why the best hydration plan is one that includes these minerals. Using products such as Nuun Active Hydration (electrolyte-enhanced drink tablets) before, during, and after workouts can go a long way to replenish electrolytes and achieve your best performance.

Nuun is a great tasting on-the-go hydration tablet with the electrolytes you need to hydrate and re-fuel, but none of the sugar and junk found in sugary sports drinks. Nuun is available in over 5,000 stores in the U.S. and in over 30 countries. Visit nuunlife.com to learn more.

About The Core Diet

Jaime Windrow is a Registered Dietitian and the Nutrition Programs Director at TheCoreDiet.com. Jaime’s interest in sports nutrition began when she danced professionally for 12 years with the Radio City Rockettes, and continued when she began to race in triathlons as an elite amateur. Jamie holds a number of age-group wins and podium finishes, as well as a finish in Kona at the Ironman World Championships.