2 weeks ago, I finished my first Boston.  I was fortunate to finish in 3:05, well in front of the bombs that killed 3 people and injured many more.  Much of family traveled to Boston to watch me finish and spend time together. Up until the terrorist attack, we enjoyed a beautiful weekend together. My family moved away from the finish area well before the bombs exploded.  In fact, we were celebrating my successful finish at a restaurant only blocks away from the terror.

Finishing Boston Marathon in 3:05. Well ahead of explosions

With the music blasting and the restaurant crowded with happy Red Sox fans and others celebrating a successful Boston Marathon, we didn’t hear the explosion.  In fact we were only made aware of it when a friend near the finish texted me to ask if I was okay. When my boss texted me from Chicago to ask what was going in Boston, we knew the bombs were real.  The TVs in the bar just started to cover the horror as we were leaving. We really had no clue about the severity of the situation until we walked out and were confronted by chaos. Helicopters overhead, sirens from police cars, bomb squad and ambulances and smoke from the blasts still hung in the air over Boylston St. Our cell phones didn’t have reception as the lock down of the area began.  The police ushered us outside the locked down area, past wooden barricades.  We said good bye to our family as everyone departed for flights back to the airport and in various directions away from Boston.

Rumors circulated the streets that additional bombs had been found and would be detonated by the police.  As of yet, we still didn’t understand that these explosions had resulted in death and so much injury.  My 2 boys were understandably very frightened of additional bombs. Typically we witness these tragedies on TV, not first hand. My sons asked if we would would be safe walking back to the condo in Beacon Hill where I had stayed the previous night.  With the lock down area growing by the minute we were faced with a 2+ mile walk that took us past the area where race officials had stopped the marathon.  We could see a huge mass of people gathering just past the 25.5 mile point of the course.  If you’ve never run a marathon, consider the physical pain of strenuous exercise for 4+ hours.  Now add mental anguish of being told you cannot finish the race even though you’re less than a 10 minute walk away from achieving your goal. People were literally staggering down Commonwealth Ave in their race attire.  In most cases this was simply a tank top shirt, shorts and running shoes.  I saw a guy hobbling around without shoes because he had run the race barefoot.  Everyone was trying to figure out how they could meet up with family and friends. 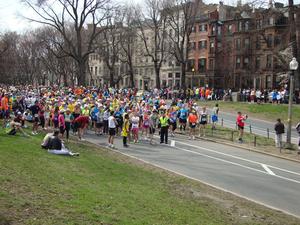 To add to the confusion of not being able to complete a race in which they had trained for so long, most of these runners were now very cold and very sore.  Although the sun was still out at 3:45pm, the temperature was quickly dropping and wind was picking up.  What had been such a beautiful day had so quickly turned into a nightmare for so many.  We came across a young lady in tears whose cell phone was out of battery power.  She had no way to communicate with her friends, so we helped by phoning & texting her friends. The service was spotty because it had been shutdown in the area due to fears of remote activation of additional bombs. Others who didn’t have cell phones asked for our help.  We helped a young guy who told us how this was his 2nd marathon.  The first was last year’s New York Marathon.  He talked of the irony of training for 2 marathons and not being able to finish either due to circumstances beyond his control. I gave up my space blanket and offered the protien bars & water given to me at the race’s finish.  Although I was stiff and uncomfortable from having just finished a marathon 2 1/2 hours earlier, I was with my family and had warm clothes.

It occurred to me that the race organizers who were forced to halt the marathon for obvious reasons had no plan to accomadate the 4,000+ people still on the course. These runners were forced to simply walk around a completely secured finishing area away with little if any kind aid and more important, without their belongings that had been dropped off at the start (typically a plastic bag with sweats, clean shirt and cell phone). Some people had been offered garbage bags with a hole cut out so they could stick their head through. A few others were able to get a space blanket in which to wrap themselves.  These unfortunate many were now trying to work their way around the secured area to meet family and pick up their belongings.  They were also faced with the fear that a bomb had exploded near the finish where their families may have been.

The amazing thing about horrible situations like this, is that it often brings out the best in people.  As we plodded our way down Commonwealth Ave, helping and consoling whoever we could, we observed residents of the neighborhood coming out of their homes to offer water, blankets, jackets and towels.  They freely gave these things to total strangers, knowing they wouldn’t likely be returned. Some even offered their homes and a phone so marathoners could relax and communicate with their families to arrange for a meet-up.  As we approached Beacon Hill area, a little over a mile from the finish, our cell phone service was fully restored.  I was amazed at how many texts and voice mails appeared on both mine and my wife’s phones.  People from all over the U.S. were reaching out to us to check if we were okay.  We met up with friends, cleaned up and watched TV reports of the tragedy.  It now was clear to us that a terrorist attack had occurred, which resulted in death and a growing number of injuries to many.  My kids were less frightened because we were now away from the scene.

Once train service was resumed, we headed outside of Boston to stay with family in nearby Stoneham.  My wife and I spent the rest of the evening returning texts, voicemails, e-mails and calling other family to assure all that we were okay.  As the evening ended we prayed for those that had been injured and said thanks that we were all okay.  My Mom and Wife thanked me for running so fast that we were well away from the finish when the terror occurred.